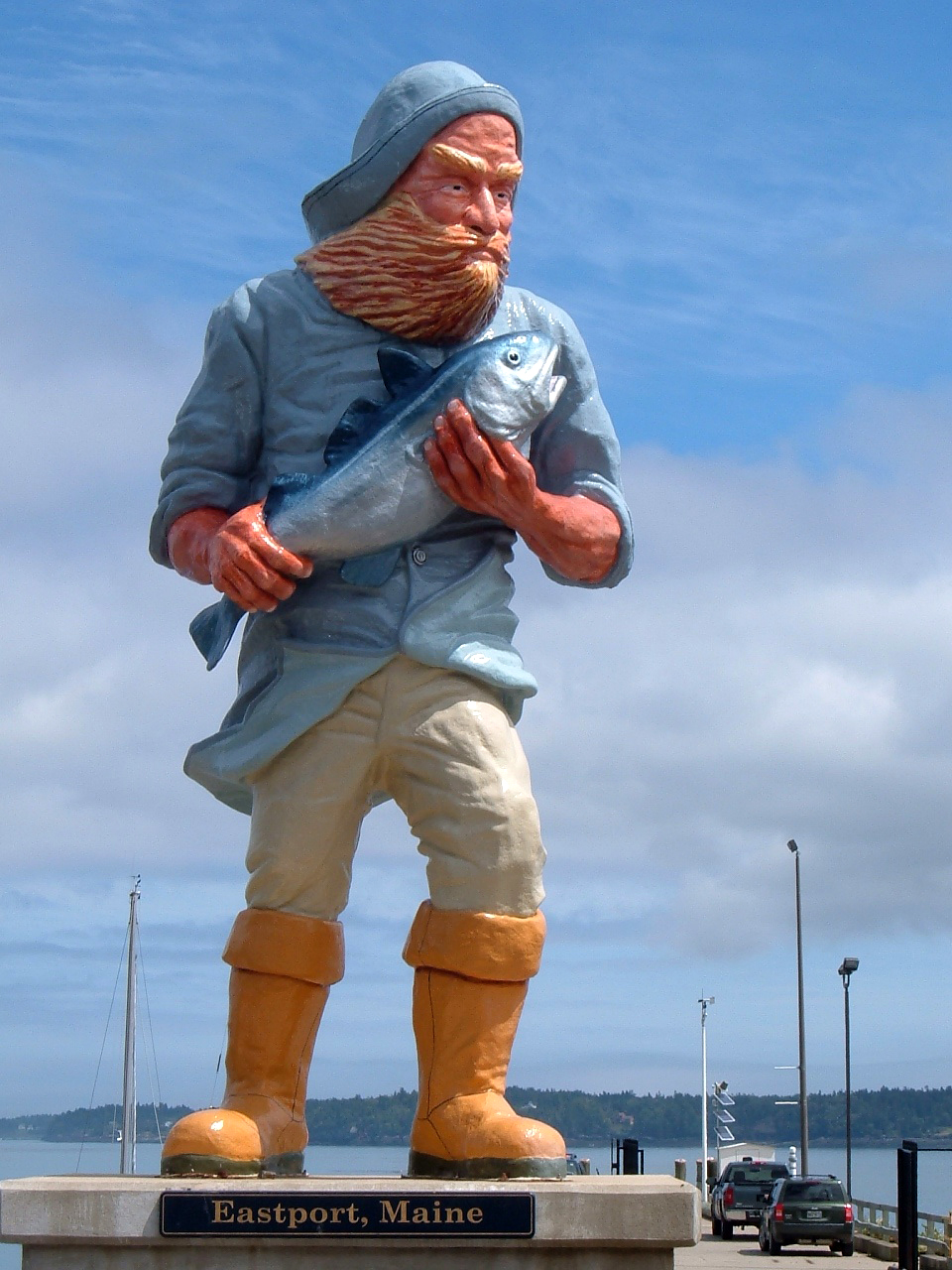 A committee of citizens concerned about the fate of the fisherman statue in downtown Eastport has begun a fundraising campaign. Erected three years ago, the statue quickly became a favorite of tourists, but the colors of the gray-garbed and red-bearded fellow wearing galoshes and carrying a large fish in his arms have dimmed. Its base is deteriorating, and vandals destroyed the lamps that once illuminated him at night.

“I think it’s engaging, almost cute, and it’s grown on me, says Robb Cook, a member of the Eastport Area Chamber of Commerce and the fundraising committee. “I wouldn’t compare it to serious sculpture, but it has an economic value to the town. Tourists love it.”

Cook points out that the town has not been maintaining the statue. Not only is sunlight fading the fiberglass statue’s colors, but also water has been getting inside the wooden platform upon which the statue’s metal base is mounted. “It needs polyurethane ultraviolet protection put on the fiberglass,” Cook says.

The fisherman is the work of Jeff Poss and was created for the Fox television series Murder in Small Town X. Although the funding for the statue was cut from the show’s budget, Poss went ahead and made it anyway. The result pleased the show’s producers, but when they left town, they didn’t take the statue.

“The whole thing took about a week, which was an insane pace,” recalls Poss, who notes that a big lobster wearing a raincoat was also considered as a possible statue. “There were at least three all-nighters in there from a few of us. The art director and construction coordinator kept saying, ‘It’s good enough. Hell, it’s only a TV show.’ I’m glad it has outlived the TV show, and we really tried to put as much in as we could in the time allowed.”

Poss guesses that if the fisherman were allowed to deteriorate, it would cost $30,000 to $40,000 to replace him. “They would have a better statue and base, but it wouldn’t be cheap.”

The “Save Our Fisherman” fundraising committee believes $10,000 could provide the statue with a permanent base and be enough to repaint the statue when necessary. Monies could also be used to create an interpretive sign explaining the connection between the statue and the 9/11 attack on the U.S. The $1 million winner of Murder in Small Town X, New York City firefighter, died in the collapse of the World Trade Center towers.

“I’m a fan of the statue, and I think I have a pretty good appreciation of its value to the town,” says Chris Brown, the owner of S.L. Wadsworth and Sons hardware store, which is located across the street from the statue. He, too, is on the new fundraising committee. “I think it’s a valuable asset to Eastport, both for tourism and symbolism. People drive a long way to see something like that. The backdrop is spectacular, whether it’s foggy, sea smoke or sunny.”

Brown acknowledges the complaints that the statue’s legs are too short and that the fish is the wrong type, a Pacific salmon rather than an Atlantic salmon. “But I think he’s perfect,” Brown says. “He’s watching over the fleet, and he symbolizes the whole working waterfront, just like the Paul Bunyan statue symbolizes Bangor and the Indian statue symbolizes Skowhegan. He’s fading fast, and I think it’s a shame we haven’t taken care of him. The people who don’t like the statue are the people who are negative on tourism.”

Wayne Wilcox of Eastport, a local historian, says he understands the appeal of the statue to tourists. “It’s filling a need downtown. But it’s not the proper thing to fill the need. Something, such as a mariners’ memorial, would be better. I don’t want to see the statue destroyed. It has a place in Eastport, but it should be at the breakwater or up by the Irving station.”

The statue “doesn’t fit into the history of the town, and it doesn’t lend substance to the town,” says Edward French, chairman of the city’s. Approval by the board is needed for changes within the local historic district, and the statue is now within the district. “It’s a reminder the TV series was here,” he adds.

The “Save Our Fisherman” committee members believe the statue’s current location is favorable, and it should stay put.

Another admirer of the fisherman statue and member of the new fundraising committee is wood sculptor Roland LaVallee, the owner of Crow Tracksof Eastport. “I think it’s nice to have downtown,” LaVallee says. “It lightens up the mood. I see tourists getting their pictures taken next to it. I’d like to see the city put a little money into stabilizing it. It’s not bronze. It won’t be around forever, but we could have it last a few more years.”

He adds, “Personally, I like it every time I see the statue. When I come down Water Street from my house, I see him standing there holding his fish, with the breakwater and the inner basin in the background. In fact, I think a big mermaid would be great downtown, too.”

Donations to the fundraising campaign can be mailed to the Eastport City Rooms, 78 High Street, Eastport, ME 04631. Checks should be made out to “Save Our Fisherman.”

Update: July 27, 2004
From Nortoneo (at) aol.com
Thanks again for your help. We have now raised nearly $2600.00. In addition, Moose Island Marine is going to supply all the Fiberglass and paint materials needed. Also, two of the businessmen on the main street are willing to pay the flying expenses, room and board for the person who built the statue. He has expressed an interest in coming up to restore it!!
-Eleanor